10 000 Russos
10,000 Russos are a formidable force within modern psychedelia; their industrial psych/post-punk has been charming fuzz-heads across the globe with its stomping, shamanic mantras and otherworldly krautrock slant. Following their debut album and recent split with The Oscillation, the Portuguese trio have released their huge second LP ‘Distress Distress’ on April 7 2017 via Fuzz Club Records.
This record was heavily promoted with two huge european tours (one of 50 gigs, other of 60) during the years of 2017 and 2018. Alongside sold out club gigs in 14 different european countries they have been headliners in festivals like Spacefest in Gdansk, Fuzz Club Fest in Eindhoven, Paredes de Coura in Portugal, Psych in Bloom 3D Fest in Stuttgart or Label Mates Fest in London.
10,000 Russos have once again transcended the boundaries of psychedelia as we know it today; their dark, droning noise is twisted, distorted and pushed to its limit. ‘Distress Distress’ is so ritualistic and industrial it see’s their usual post-punk sound – a primal and celestial mix of The Fall, NEU! and Spacemen 3 – pushed within an inch of techno territory with its abrasive, metronomic rhythms.
Since their debut self-titled LP,Russos have been touring Europe extensively and acquiring a cult-like following at a whiplash rate – their incredible performance at Liverpool Psych Fest was widely described as a stand-out set by numerous music publications and fuzz fiends-alike. With the entrance of second record‘Distress Distress’, the band are showing no sign of slowing down either – redefining psychedelia with every hiss of feedback.
10 000 Russos are taking 2019 to record and release a new álbum and to finally deliver their sonic krautrock in South-America first and then in Europe.

Melt Downer
"A blissful concubinage of unholy and demented sounds. Trippy, dangerous, dreamy & brutal. They melt braincells."
A coherent mix of noisey and at the same time soulful garage , wave and postpunk! This will be a surprise for sure!

Melt Downer, consisting of Wolfgang Möstl, Mario Zangl (Mile Me Deaf, Killed by 9V Batteries) and Florian Giessauf (Torso, Red Red Red, Das kleine deutsche Eck) play heavy psychedelic rock with dub influences, far away from any macho rock clichés. Founded in 2014, they spent two years perfecting their partially improvised and free sound structures on stages in and around Austria before recording an album. It is definitely not any overly intellectualised tedium - structured fun has as much justification as banging on drums back in the Stone Age. They've already shared the stage with idols such as METZ and Destruction Unit, and their shows left even these heavyweights of this genre with gaping mouths. Through the transcription of the raw and nevertheless complex dynamics on the long-awaited debut album, they've succeeded in creating a true work of art that hasn't lost any of the energy of their live shows. This can be attributed to the lavish production that the band themselves are responsible for. In proper DIY manner, everything from setting up the first microphone to mastering the album and creating the artwork was under full control of the band. The results are more than just music to listen to. It's dangerous, brutal, dreamy and trippy. It will melt your brain cells. It's Melt Downer, yo.

MY FRIEND PETER
The Graz based one-man-studio-artist Benedikt Brands swirls up groovy Beatlesque sound-dust in a soothing, hypnotic fashion. He does that accompanied by a live band established in 2018 with whom he brings his warm and smooth Neo-Psych-Pop on stage. Together they supported bands like Holy Wave, Fenster and Molly. The previous albums were recorded in his home stereolab and have been released on Burger Records and La Pochette Surprise. In Summer 2019 My Friend Peter went to the studio to record another album which will be released on Numavi Records in 2020.
https://myfriendpeter.bandcamp.com/ 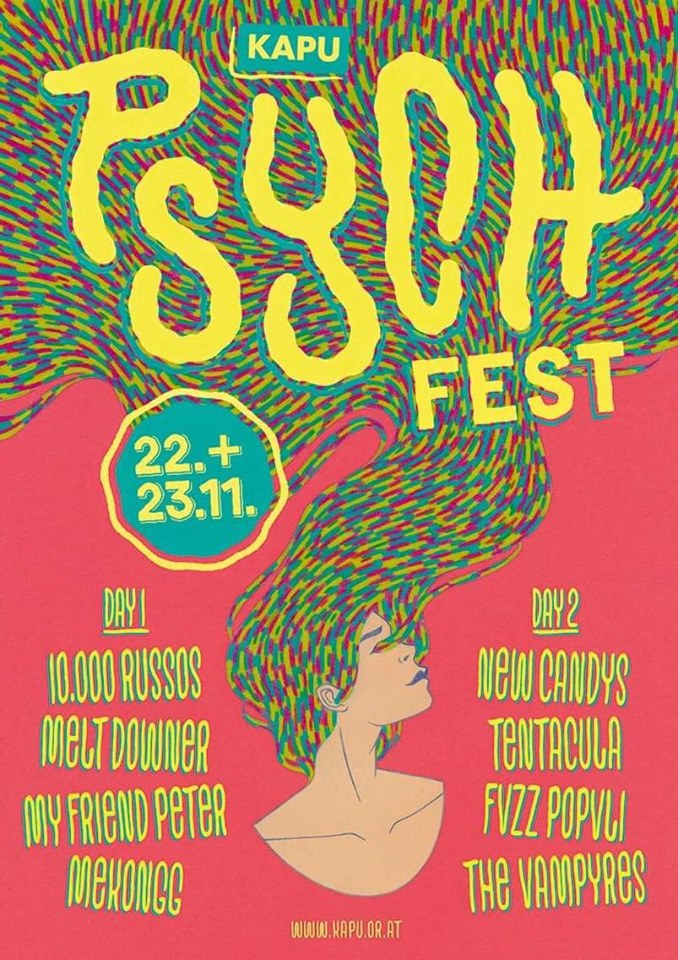